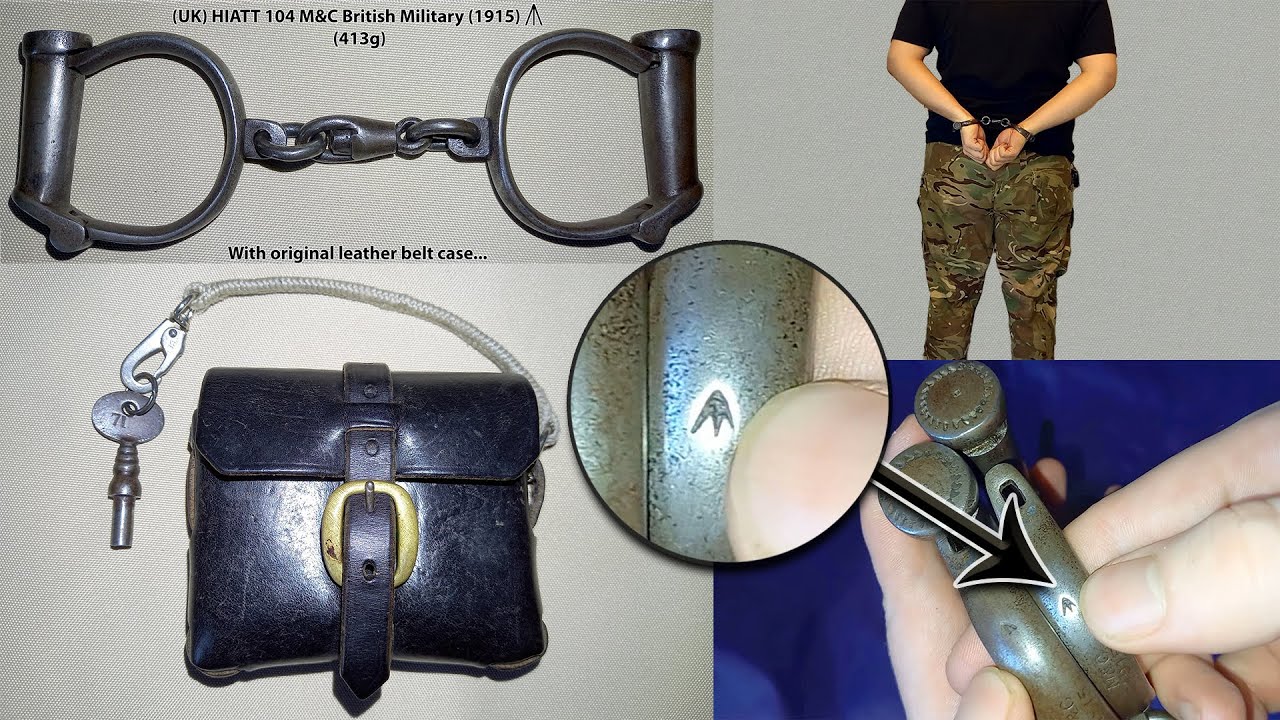 These are a pair of Hiatt Model 104 Ministry and Civil 1915 Darby handcuffs. These are a British military pair. Exactly the same as my younger 1916 model, these 1915 are slightly heavier though and not plated. So these would have been made 1 year into WW1 (world war 1 also known as The Great War).

They also have the broad arrow or crows-foot stamp on them, which apparently is not often seen, since the presence of M&C already denoted they were military issue. M&C was non-combat/war related, so my theory is perhaps they were broad arrow stamped because they actually made it to the field of battle and the presence of the broad arrow may have been preferable since it was on most of their other stuff? I do not know, this is just my theory.

They are size 2 and just fit my wrists (same size as my plated shiny pair of 1916). So these would likely be a medium size. Comfortable enough for my wrists. I take a size large in gloves and I'm absolutely not a skinny person... So bare these things in mind when judging sizing if you acquire a pair.

I am assuming these have been well-used because when you turn the key, the pawl plug it's self actually twists a bit, meaning the square hole it fits into is not as tight fitting, so there is some slop in the movement internally. So I think they have probably seen a lot of use, though I doubt they are in danger of being worn out.

When I saw these on eBay, I assumed someone had found an old leather pouch that they fit in, but it turns out after looking more into it and asking around that this is absolutely a genuine leather belt case to hold them in, with a nice lobster claw connector so the key can spin freely without having to be unclipped, while being easy to unclip if the key needed to be handed to someone else.

The key number matches the handcuffs, which is nice. This key perfectly fits my 1916 pair but does not nicely work in any of my other cuffs. I won't abuse this key to try and get it's threading working in my other cuffs, I have enough keys for those, so I will leave this key as-is. It's a nice complete whole set!

I did have to do quite a bit of spraying solvents and oil in to get some gunk out. I have used peek polish and renaissance wax on both the cuffs and key as well as the leather case.

I love this little set! I shall keep it all together in my box, rather than separate everything. Normally cases are in some drawer, keys are centralised in my safe, but in this case I will leave it all intact.